So far, the investment industry has been among the winners: the vast majority of businesses are still profitable, industry earnings are resilient, and investment broker employment has never been higher.

According to the latest data from the Investment Industry Association of Canada (IIAC), nearly 80% of businesses were profitable in the first five months of 2020. The industry’s shift to remote working is bearing fruit and employment continues to grow, reaching an all-time high (43,746 ) at the end of May, despite the pandemic.

Companies are maintaining their profitability by controlling their operating expenses in a context of relatively modest decline in overall revenues. Preliminary data from the IIAC indicates that revenues fell just over 10% in March, when the pandemic was declared. In April, at the height of the lockdown, revenues rebounded strongly – thanks to temporary spikes in fixed income trading, debt underwriting and commission-based income – before falling again in May.

Click on the graphic to view it in full size.

Beneath these relatively healthy overall trends, the industry is undoubtedly feeling the effects of the pandemic. For example, the revenue mix is ​​changing dramatically: some segments of the business – such as debt securities underwriting and trading – have increased in response to a spike in market volatility and economic disruptions, while others – such as interest-related income – suffer.

At the start of the year, the investment industry was generating about $1 billion a month in interest income. That amount fell to around $800 million in March before plunging to $480.0 million in April and just $425.9 million in May. The IIAC attributes the drop to the fact that the Bank of Canada lowered interest rates from 1.75% to 0.25% in March in response to the crisis, which forced broker-dealer spreads to tighten considerably.

Fortunately, much of the decline in interest income was offset by gains in other areas.

Crashing interest rates, coupled with an urgent need for funding across a range of industries due to lockdowns, sparked record debt underwriting activity in the second quarter of this year.

Debt underwriting revenue more than doubled in April to $176.8 million from $69.3 million in March. Activity has since slowed, but revenue remained strong in May ($132.2 million).

Equity underwriting revenue fell amid April’s peak in debt activity, but overall investment banking revenue was still above average for each of March, April and May , reports the IIAC.

Along with robust funding activity, transaction volumes are also reaching record highs this year in response to rising market volatility.

In the first half of this year, trading volume on the TMX Group Ltd. equity markets increased by 39.2%; activity increased by approximately 50% on TSX and TSX Alpha, TMX’s main marketplaces; and volume grew a much more modest 13.5% in its venture market.

Thanks to the surge in trading, commission revenue jumped 58% in March (from the previous month) to $462.5 million, the IIAC reports. Since then, commissions have declined to more typical levels, but remain above average.

Although the commission data does not include mutual fund commissions, this segment of the business is showing remarkable resilience. Mutual fund assets under management (AUM) are almost back to pre-pandemic levels, and fund sales in the first half of 2020 are up from the corresponding period last year .

Bond fund sales are also in positive territory this year, despite large redemptions in March that wiped out the segment’s RRSP season sales. 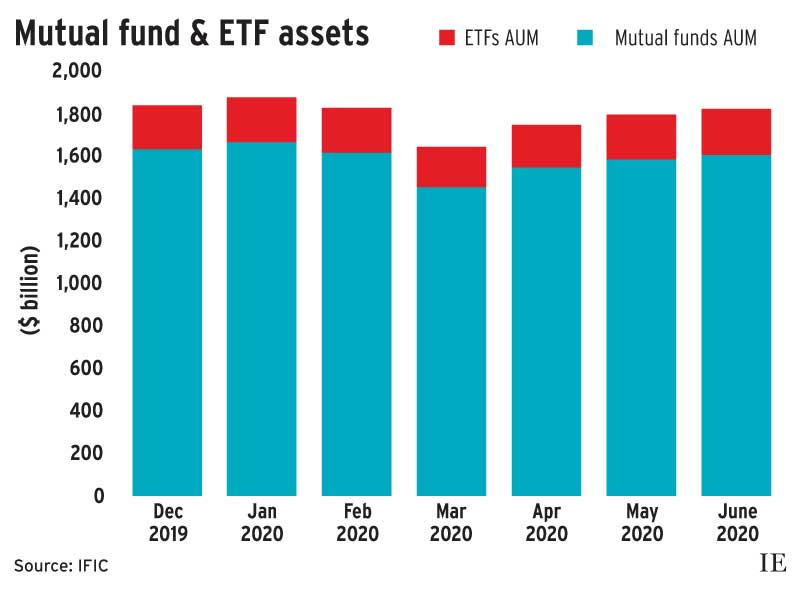 The sales figures could have been much worse for bond funds. Researchers at Bank of Canada found that sales of Canadian bond funds held up better than expected in March, given the extent of the disruption to economic and financial markets caused by the pandemic. The Bank of Canada’s study of 188 Canadian bond funds found that the segment’s record $14.4 billion in March redemptions should have been more than double that amount; modeling of the historical relationship between sales and fund performance indicated that redemptions should have exceeded $30 billion during the month.

The better-than-expected result was due to several factors, including the Bank of Canada’s emergency measures to boost market liquidity and the relaxation of borrowing limits on bond funds by securities regulators to to ensure that funds can meet redemptions without selling significant amounts of assets under management. Efforts by stockbrokers to appease customers and firms that charge higher exit fees to reflect the high cost of liquidity have also helped limit bond fund redemptions and prevent calamities in this segment. of the market.

The overall strength in the wealth management business is also reflected in IIAC data on industry commission revenue, which reached nearly $2.5 billion for the March-May period. April set an all-time monthly record, with $910 million in total revenue, likely reflecting the record highs the markets hit before the pandemic.

Early results from the investment industry are encouraging, but it remains to be seen whether this strong performance can be sustained in a prolonged period of extremely low rates and intense economic uncertainty.